I’ve known many a parent who has a desire for their child(ren) to be a leader. They have that drive for one or all of their kids to see them participate in school politics, be class president, or on the sports side, the captain of the team! But isn’t that true? Don’t we all tend to want to be leaders in some way or another?

Think in your own life growing up – can you tell me that even 50% of the time you wanted to do want your parents said? You wanted to be in charge of your fate, your choices – you wanted to LEAD your life, and while your parents were more seasoned likely in life, having gone thru the choices you were about to make, and simply trying to save you pain – they couldn’t prevent all the pains you had to suffer thru, but thats part of growing up!

Lately I have seen a reoccuring theme coming at me, from the book Not a Fan I am currently reading, to even some songs I have heard on the radio including this one:

So let my life speak loud and clear
Lord, I wanna hear

I’m so glad that I get to serve You, Lord
You’re the only One I am living for, woah
I’m gonna run straight into Your open arms
I’m gonna follow You with all my heart, woah, woah

Moriah Peters sings a lovely song, note the highlighted areas – about following, and in this case being followers of Christ – just like the book I’m reading it really looks at being a follower of Christ, not just a fan, and I think especially this day in age, with the Facebook Mentality of life, its easy to

Girlfriend – But just like there is a difference between

– so is there between Fan and Follower, let’s goto the definition:

Fan: A person who has a strong interest in or admiration for a particular sport, art or entertainment form, or famous person.

Follower: An adherent or devotee of a particular person, cause, or activity.

Big differences between each and yet easily agreed too, similarities which could allow you to wade in either side of the pond, not 100% sure where you stand – and so close together you could easily become complacent in Like as a Fan vs. Follower in Love – it comes down to what your drive is, and I think the Word shows us many times how important the driving force in things needs to be not for praise in doing something, but rather something that comes natural, from us, not from the thought of reward – one verse I’ve posted before and I love:

Each man should give what he has decided in his heart to give, not reluctantly or under compulsion, for God loves a cheerful giver.

I love that verse in this flow of Fan vs Follower because it lays it out wonderful “not reluctantly or under compulsion” its the perfect example of what separates Fan from Follower -and- Like  from Love. When your a fan, you do things sometimes under compulsion… what’s a good example…

They are looking for folks to see them and say “Woah, what a fan! They are DEDICATED!” and thats where the lines blur, where the fan feels they “LOVE” a thing, be it a team, be it an actor, they show a HUGE compulsive act which the world takes notice of – Christians get this too sadly, when you have folks calling out people on their sins, or the years growing up when there were abortion clinics blown up etc. – it renforces where we aren’t emulating God by following Him but rather being a FAN trying to get His attention by doing something so compulsive the World and thus God must take notice – Saddens my soul because quite simply the Word states what God is…

And so we know and rely on the love God has for us.
God is love. Whoever lives in love lives in God, and God in him.

If your a follower of God, and God Lives in YOU and YOU in HIM shouldn’t you have Love? Shouldn’t your heart drive you to do good in this world? Shouldn’t Following God who is Love produce Love from You? Like the song above noted “If they’re following me then – They’re gonna follow You” – folks should see things different in a follower than a fan, because in following someone changes your direction – changes how you operate, but too that ever so close similarity as a Fan you sometimes follow a team or band across the world, and yes it can change your direction, but for a season, a tour, but not the Life Long Change that Following Christ truly TRANSFORMS your ENTIRE LIFE for more than a season.

Long time fan of the artist Steven Curtis Chapman, recently he re-released some tracks from when I was a kid, one of which is “For the Sake of the Call” which I think really gives the idea of what following can do:

As the lyric reads:

Nobody stood and applauded them
So they knew from the start
This road would not lead to fame
All they really knew for sure
Was Jesus had called to them
He said “come follow Me” and they came
With reckless abandon, they came

Its not about praise of the world. It’s not maybe by world’s standards as “fun” as being a fan, your not going to be on the Jumbotron here on Earth, following does require that “reckless abandon” in that when Jesus did call – they followed (Matthew 4:20). Not fan’d up painting themselves with “GO JESUS”, not went and talked things over with family and friends, they let go of the reigns of their lives and moved forward and followed Jesus where he went – they left a profession there on the ground and moved forward.

So which are you? A fan or a follower? Like the book Not a Fan starts it asks that very question and it’s not that easy to answer for most, because indeed its so easy to look at one and believe your the other – but look at WHY you do things in life – is it for your own fame, happiness, joy, riches? or for your Heavenly Father?

Take a minute this week to really evaluate why you do things, is it to impress someone? is it to get folks to give you that pat on the back? or is it because your desire is heaven focused and want to spread the Love of God that’s in your Life with those around you and one day simply hear the words “Well Done”? Look at your daily actions and desires and decide are you a Follower in Love or  do you Like as a Fan? 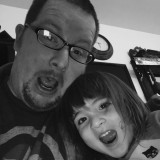